Tom, Dan and Phil are passionate about craft beer and motivated by people’s overwhelmingly positive responses to their brews. They’ve loved every minute of their craft brew adventures and proud that the New England region has embraced them with open arms. 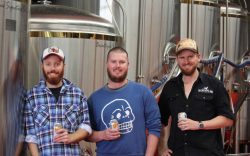 Three years on since the Dog’s launch and Tom Croft, Daniel Emery and Phil Stevens are friends first and brewers second. Having blown up many a blender in their time – all in the name of hand and homemade alcoholic ginger beer – the boys have since truly embraced the Australian dream. They are flying higher than ever before, with a craft brewery and two craft beer bars under their management.

They believe that good beer is the perfect reason to bring good mates together. After starting the business with Farmhouse Ginger Beer, they decided that New England was missing some quality craft beers that they were itching to produce, using only the freshest produce to brew the best.